We’ve been asked several times to help create a tandem sled that could be pull by one person at times but also split into two pulks at other times, so that another person in the party would have their own sled. Some customers like a tandem pulk sled as an alternative to toboggans.  The idea is that it would be possible to pull a large tandem load on the flats and split the load into two trips over very steep portages. Our friends who do a lot of ice fishing have also asked for more storage space than a single pulk offers.

A double sled or tandem pulk has about the same, or more storage space than a more traditional toboggan. It pulls as well as a toboggan on lakes and flatter terrain.  It would excel in steeper terrain with sidehills and downhills.  By splitting it into two sleds, no route would be too steep to tackle.  After experimenting with this concept, some things became very apparent.

1.  A tandem pulk never tracks and turns quite as well as a single one, but with a good setup it can track reasonably well and provide a great source for extended storage. 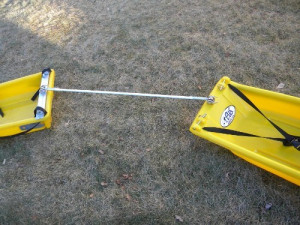 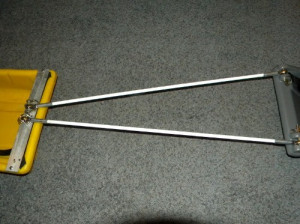 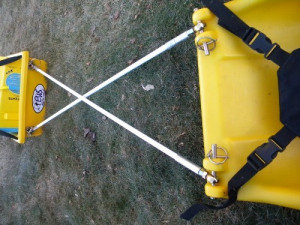 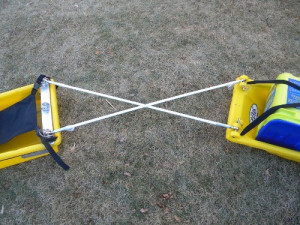 6.  After deciding on the location, we worked to create a plate that would allow them to be mounted on the back corner in such a way that they would not interfere with our covers. 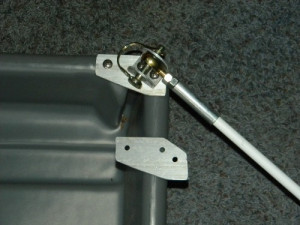 7.  By extending the threads on the shaft of the balljoint – it created more range in the fitting allowing tighter turns. 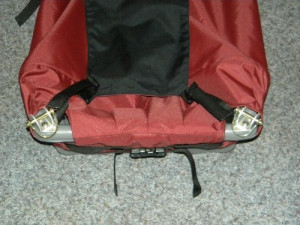 Our experimentation verified the practicality of a tandem sled approach to situations where you have to take more than you can fit on a single sled.

We do not normally manufacture special poles for tandem sleds because the stress you normally encounter in this location does not require the durability or expense of our base pole systems, but we can make some as special orders if requested. (Since the manufacture process would be almost the same, the price would be $5 less than our full length base poles and would include the channel kit for the rear of the leading sled).