Using a Pulk as a Game Sled

Take some of the work out of your next elk, moose, deer or caribou hunt by using a pulk as your game carrier!

Here is a review from Rob who used SkiPulk.com poles on his diy homemade game drag sled: 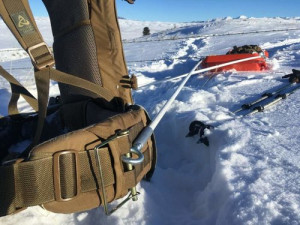 I got a chance to try these poles from skipulk.com yesterday hauling out about 180# of elk and gear in my game sled. The poles attach to a waste belt and make the job much easier. It turned out that a 5/16 x 3 1/2″ PTO pin worked well enough to attach them to my Mystery Ranch frame without modification. After using the poles I think they are the best $ I’ve spent. When crossed they even controlled the sled on side hills.

I use this meat sled a lot, but pulling it with a rope is more work than necessary.

On snow it isn’t much work at all to pull and the poles make it easier to control the sled and give your arms a break. Dragging an entire elk on the sled is less work than a single trip with 1/4 of it on your back. Even on dry ground it is easier than dragging out a whole deer, but depending on the circumstances may be more work than boning it in the field and packing it out on the return trip. You also have to count the trip back to the truck to get the sled. 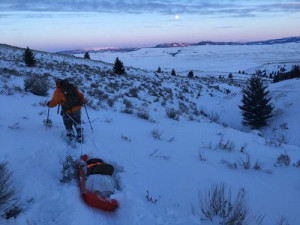 It handles sidehills pretty well without assistance, at least in the deeper snow. I did a sidehill much steeper than the last photo. The poles flex a lot, but kept it tracking straight. You want to keep the center of gravity as low as possible to keep it from tipping.

After rereading the instructions it would have worked even better had I used the included velcro strap to keep the poles together at the crossing point. Installing fins on the sled would also help.

Find Rob’s Facebook post on his trip here where he used poles attached to his pack to haul out his game sled.

John from Alaska sent in a photo and wrote this about his experience using SkiPulk’s Paris system as his game drag sled:

We each dragged out an entire caribou (field dressed and quartered but with antlers) more than 5 miles across the arctic tundra. This was about as much weight as a guy can conceivably pull. Despite banging into tussocks and hauling across patches of bare ground, the harness assembly showed no wear and the pulks performed admirably (although the men were toast).  Cheers – John 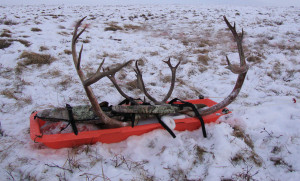 Another user submitted these photos of his hunting trip using a Snowclipper to drag his game out: 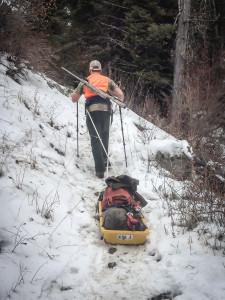 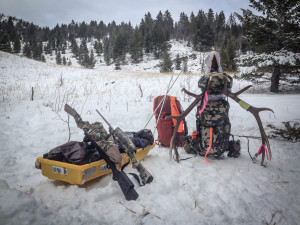